A campaign by Civic Hall fellow Andrew Slack to unite Star Wars fans against the Empire of Darth Money.

As we speak, the dream life of Star Wars and waking life of politics are merging. One of history’s most popular authors, JK Rowling tweeted she believes Trump is so evil, that even in her deepest imagination she could not come up with someone as terrifying. Darth Trump is spreading on YouTube at Ludicrous Speed. This is not to mention that Ted Cruz’s campaign is offering a chance to see the film with Cruz (and they have him with a light saber). Bernie Sanders fans are saying, “You’re my only hope,” libertarians are comparing Obama to the Emperor, and the internet is chock full of Star Wars Hillary Clinton memes that truly cross into the surreal.

The force of psychological energy for effective cultural acupuncture runs strong when Star Wars meets American politics. And here’s how we think Star Wars can help us build a real U.S. Rebel Alliance, spoken in the vernacular of the movie but written against the backdrop of our political reality:

We need to defeat the Empire of Big Money so that we may live in a Republic that is of, by, and for the Force—the Force of interconnectivity that is We The People, when all of our voices are heard.

Right now, the Empire of Big Money has struck back against We the People, silencing our voices with the force choke of Darth Vader. It is up to us, to step up as Jedi-in-training and join the U.S. Rebel Alliance, the way Luke starts his journey in A New Hope. Remember, when Obi Wan invites him to get off of the outer rim planet of Tattoine, he is resistant:

“Look, I can’t get involved. I’ve got work to do. It’s not that I like the Empire; I hate it, but there’s nothing I can do about it right now… It’s all such a long way from here.”

Similarly, 84 percent of Americans polled believe that the Empire of Big Money is a problem but probably less than 1 percent feels agency to do something about it. It is time to awaken the Force of We The People and that is what we intend to do with the U.S. Rebel Alliance.

In the United States, we are 330 million people, all of us heroes waiting in the wings, wishing to go an epic journey but nervous to take on the Empire. And while activists work on issues around gun laws, taxes, climate, religion, racial justice, and economic equality, it’s pretty clear that regardless of where we stand on these issues, should any of us want to be effective on them, we need to recognize that the Empire standing in our way is Big Money.

We now have an empire that is of, by, and for the corporations. The Empire of Big Money. In the words of one presidential candidate, “Congress does not govern Wall Street. Wall Street governs Congress.”

But it doesn’t have to be this way. As the saying goes, it is far, far better to light even the smallest candle than to curse the darkness. This past November, both Maine and Seattle won ballot initiatives setting up small-donor public financing systems. We the People spoke up against the Empire; candles were lit. Regardless of the Empire’s Dark Side, we can spread the light of those candles across our Republic. And that is what we are doing with the U.S. Rebel Alliance.

We are asking people to sign the Jedi Pledge to end the Empire of Big Money, to share this video starring Mark Ruffalo, Heather McGhee (head of Demos), Darren Criss (star of Glee), Baratunde Thurston (The Daily Show), and more. This Sunday from 7pm ET to 10pm ET, we’re holding a live webcast to geek out about the new film, and we’ll be holding a meme contest on fighting Darth Money.

By signing the Pledge, that’s all just the warm up. As we roll out on Twitter as @usrebelalliance, as well as on Facebook, Tumblr, and YouTube, you’ll hear about actions to get President Obama and the candidates to sign the Jedi pledge and use that to create accountability. We want to help make the very needed issue of Big Money center stage in the U.S. primary. Imagine getting the debate moderators to ask the candidates, “A lot of Americans are comparing Star Wars to the Empire of Big Money. If the Death Star is as they suggest, made by Darth Money and Super Pacs, how do you respond?”

In defiance of the notion that “serious topics” must only be addressed “seriously,” we are aiming to turn this winter into a Star Wars U.S. Rebel Alliance party to create change. We plan to use storytelling through social media, guerilla theater actions, and even U.S. Rebel Alliance hotlines in a where we are the heroes in a real world choose your own adventure.

But You are Our Only Hope! We want your ideas on strategy regarding the larger campaign, social media, guerilla theater, pragmatic asks, and more. We want to work with you on how to get people who have never been engaged in civic life to be working alongside veteran activists.

It is time for the franchise that brought us Obi Wan Kenobi to invite 330 million American heroes waiting in the wings to go on an adventure that balances the Force of We the People. It is an adventure to bring down the Empire of Money in politics while lifting up the heroic agency that flows deep in each of us. It is time to make good on our childhood dreams of becoming the heroes’ in films like Star Wars.

May we use the common thread of Star Wars to Awaken the Force that is We the People. May our light emerge from the Dark Side and the Empire. And #MayTheForceBeWithUS.

PrevPreviousHow Twitter and CBS Found the ‘Voice of the Crowd’
NextRound-Up: Three Questions That Didn’t Change the GOP DebateNext

How Twitter and CBS Found the ‘Voice of the Crowd’

“For 55 years, we’ve all been yelling at the screens in presidential debates…This is really the first time the screen talked back.”

Marco Rubio weighs in on the on-demand economy, innovation and disruption, money in politics, and platform cooperativism.

This morning Republican presidential candidate Marco Rubio dropped by Civic Hall to deliver a prepared speech on the on-demand economy, followed by a Q&A with Civic Hall founder Andrew Rasiej. In his speech, Rubio touted the advantages of the on-demand economy, including upward mobility, flexibility, and independence. He argued that all of the “best innovation is happening in the unregulated space” and said his proposed tax reform plan would make the tax code more welcoming to the on-demand economy. Many of Rubio’s prepared comments tracked with other speeches he has given on the subject, although this one was without any explicit jabs at fellow candidates.

Rubio highlighted New York-based Handy as an innovative startup facing overregulation, and said another entrepreneur he met recently asked him not to name his company publicly to avoid drawing the attention of legislators.

Rubio called for a new category of worker, pointing out that those with W2 status have more protections but fewer of the freedoms that characterize the on-demand economy, but if employees are categorized as independent contractors, employers are prevented from training them or otherwise dictating how something is done. Rubio argued that a middle ground is needed, pointing out Germany already has a third category for “dependent contractors.” He added, “Whether or not this model is the best for America is something we have to figure out.”

To cut down on innovation-stifling regulation, Rubio proposed a cap on the amount that regulations can cost the economy, saying current compliance costs approach $70 billion. Rubio singled out regulation lobbied for by incumbent interests like the taxi and hotel industries for hindering competition.

When Andrew Rasiej pushed him on the root issue that makes it possible for established interests to have their way—money in politics—Rubio first said that small government is the answer: If unlimited regulation is an option, he argued, incumbent interests will “find a public safety argument and use that to put up a roadblock.” In response to Rasiej’s follow up question, again about the influence of money in politics, Rubio said that the American people should “stop electing” people susceptible to that. But he didn’t offer any ideas for how to achieve that.

Citing the impact of Airbnb on the housing market, Rasiej asked how the government could minimize the collateral effects of the on-demand economy without regulation. Rubio responded that he’s not against all regulation—he’s glad that his drinking water isn’t poisoned and that someone is checking on the planes he flies on—but added that “structural change in the economy has always been very disruptive” and pointed out that the industrial revolution brought about a number of new issues, including child labor, that had to be resolved.

Rubio repeated himself somewhat when a member of the audience—an independent taxi driver—asked whether new companies and drivers should have the same access to the market that he has, but without paying the same fees. Rubio first replied that he doesn’t think it’s the same model, but reiterated that innovation is always disruptive, citing the impact of the car on the horse cab driver. Rubio said that it is the role of government not to prevent innovation, but to help people affected get access to the new innovative economy, whether through education or other means.

Rubio was dismissive of the potential for worker-owned cooperative platforms to compete with other startups, saying, “I don’t think you’re going to get innovation that way…people aren’t driven to do it if they don’t see the opportunity to make money.”

Finally, when asked by Rasiej whether he would continue to support the U.S. Digital Service if he were elected president, Rubio said, “If it proves that it’s something that is effective and that it can attract the brightest minds to improve how government works, then that’s something we should definitely continue.” 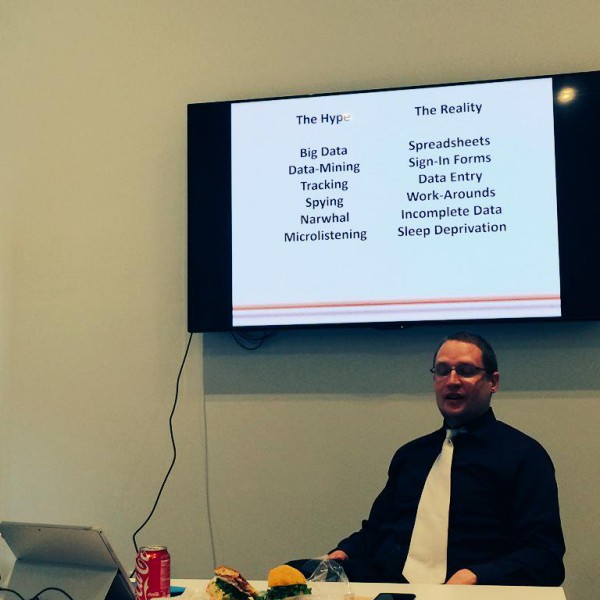 The media is still figuring out how to push political candidates beyond their comfort zone while also remaining an editorial gatekeeper and profitable debate partner.